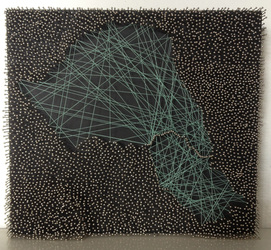 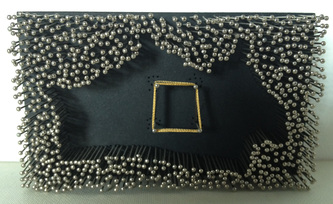 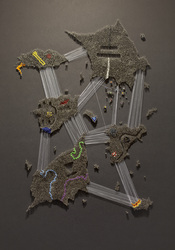 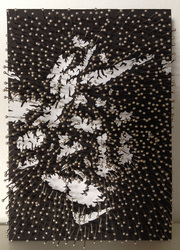 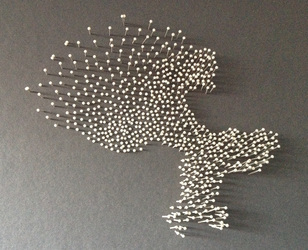 James’ work is born out of his love for his home city. He endeavours to make a link from his style of art work to journeys he has made across London. The drawings and images displayed are coded representations of elements of these journeys such as motion, time and the atmosphere of travelling through the city.

In 2005 James set out on bus route number one from Tottenham Court Road to Canada Water. While on this journey he created a drawing and a sound recording of the route. The drawing mapped the movement of the bus by holding pen to paper, it has the appearance of a seismograph diagram. These journeys were repeated on the following bus routes up to the number 35. These drawings on the bus routes themselves are just the start of the project; they have prompted the production of three series of drawings and images. These follow-up series take the form of silhouette versions of the original drawings, timed drawings and a series of large and small drawings using pins. These works were then exhibited at the Barbican Centre.

James’ pin drawings are now the central part of his practice. New pin drawings have stemmed from new projects including several new walking projects. His relationship with travel and movement through the city is mirrored in his work. There are references to cartography in both the map like shapes used in the drawings and the use of pins themselves. Not all of James’ new work has a direct relationship to a set project, so in parallel James takes time to make other drawings to develop the visual language, techniques and materials in order to progress the work.

James looks to explore new ground as well as continue themes and ideas that he has worked on in the past. James studied painting at the University of Brighton in the late 90s where he developed a visual language using mostly monochrome materials to create paintings and drawings. These works were often abstract but, as in his recent work, were created from a combination of ideas that stem from previous paintings and from art and non-art influences.